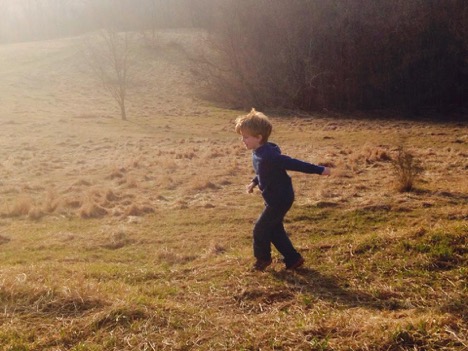 The other day, my twelve-year-old son, Reed, burst into my bedroom. “Mom, look what I found” he said. It was his stuffed Curious George animal—tattered and loved. “George the monkey” had been my son’s favorite doll when he was a toddler. I remember carrying Reed up the stairs to bed, his head on my shoulder, his thumb in his cheek, George the monkey hanging from one hand.

In my bedroom that day, I took the stuffed Curious George from Reed. He hesitated as he handed it to me—some part of him wasn’t ready to let go—but I told him that I’d keep George safe for him. I took George to my office where I propped him up on a bookshelf next to another stuffed monkey, a colorful monkey I had purchased at a shop in Hanoi. As I looked at the two monkeys next to each other, they told very different stories. One monkey told the story of my son’s childhood. The other monkey told the story of my decision to leave my son’s father, as well as the story of why I have a difficult time trusting men.

I had gone to Vietnam for my best friend’s wedding, and as I stood at the front of the ceremony next to a wide, blue expanse of water and read a bell hooks quote about love being a verb, it struck me that my own marriage was not going to last, that, in my marriage, love was used as a weapon.

Love was used to control.

My love for my husband was used to hurt me because my then-husband was emotionally and physically abusive, and I was only beginning to realize that I would never be safe while he was in my life. It was another year or two before I left. My then-husband was arrested for domestic battery, and I let him come home for two days of terror before I realized that I needed to leave. I rushed around the home gathering as many things as I could for my escape. That night, Reed and I slept on the floor of a friend’s house, and I wrapped my arms around Reed while he wrapped his arms around George. For the first time, we were a family of two.

After I left my husband, I struggled with so many feelings of caution. I had grown up with a father and brother who were never anything but kind to me, but it had only taken the one man to teach me how to fear. When I turned on my television and tried to watch Game of Thrones, I shuddered at the depictions of rape. I think that I’m the only one of my friends who turned off the show and never returned to it (I chose to watch reruns of Gilmore Girls instead). My skin crawled if a man sat next to me on a bench. I shook when a man slammed his palm down on a table for emphasis. I stopped locking my doors because my ex-husband, too often, had blocked me from leaving when he was abusing me. I knew rationally that it wasn’t safe for me to leave my doors unlocked, but in my bones, I had grown to believe that the menace was everywhere—both inside and outside of my home.

My ex-husband had never been abusive towards our son, and my therapist theorized that that my ex-husband only hated women. My ex-husband still had partial custody, and every other weekend, I would drive my son to a 7-11 in rural Richie County, West Virginia that was halfway between the town my ex-husband lived in and the town in Ohio where I had moved to get my PhD. This 7-11 was busy on Friday evenings when the men from the oil fields were getting off work. I would take my son to his father’s car, where we would not make eye contact, then I’d go into the 7-11 to use the restroom. Every other Friday, as I walked by the workers milling around, I felt their eyes on me. I imagined, probably inaccurately, what they were thinking.

Once, a man with a to-go cup and two travel-sized bottles of White Zinfandel asked me if I “went there often” in the way that someone would try to pick up a date at the bar. I was unnerved, but I responded to him politely. Like all good women, I had been taught to be polite. He told me how much money he was making working for the fracking companies. He seemed to assume that I would be impressed. I made a mental note that he was going to be driving drunk on the same highway as me. I was aware of how he seemed to assume that he was entitled to my attention. When he paid for his wine and left, he turned to me and said, “Burn baby burn!” and as I made the drive back to Ohio, gas tankers drove by me in streams, their lights twinkling in the darkness, while I wept at the way my life had turned out.

I was, it seemed, surrounded by men, and I was distrustful and afraid of them.

But I loved my tender-hearted, creative, and witty son. I loved him with a ferocity that only a single mother can understand. He and I were a team, and I would have done anything for him. What I needed to do for him, I knew, was to create a world where he was safe to be himself. I knew that my son was not destined to become his father, and I didn’t want his father’s abuse of me to become his legacy. I wanted my love for him to be his legacy.

In time I realized that, if I was going to love the man that my boy would become, I had to learn how to trust men again. I wasn’t ready to date yet, but for the first time in my life, I made friends who were men. They didn’t want anything from me but my friendship, and I saw that kindness was not solely a feminine virtue. I developed a close mentorship with my male dissertation advisor who has always been supportive and kind to me, and I worked to be closer with my father who I had grown apart from after my divorce. I needed my son to see that I could be close to men, so that he would know that, when the time comes for him to be a man, I will be capable of loving and accepting him, just the way he is.

In the first year that my son and I lived away from his father, we often went for walks in a nearby nature preserve. Once, in the spring sunlight, I captured a photo of him dancing in the mist. His entire body was joyful. And then, we took a picture of the two of us together. When I look at that picture, I see nothing but tenderness in both of our eyes. There is no anger, no resentment. There is none of what I experienced from his father because my son is his own person.

So, when my now-twelve-year old (who has just started to shave) handed me his Curious George doll with hesitance, I understood why. He didn’t want to let go of that child-like part of himself, and that’s why I told him that I would keep George safe for him. I will always nurture my son’s most tender parts because if he is going to be safe, and I am going to be safe, then our safety has to be in a world that we have created together. 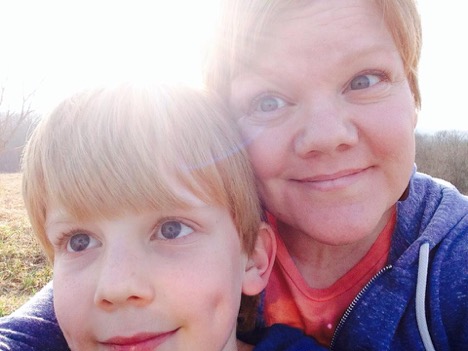